As well as the closing of all bars, restaurants, cafes and (unfortunately) my swimming pool, the 20 Mar 2020 marked the release of Rhapsody 9.0. Here’s a few notes on things that I noticed when first installing (a good way of exercising social isolation since my partner really doesn’t care for conversations about it 😉).

As well as being very long, you’ll probably notice that the name is different. 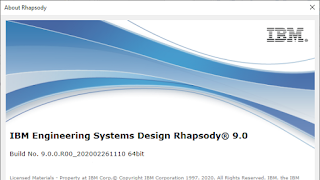 The Rhapsody name is kept but the Rational prefix is dropped (IBM stopped organising people under this brand a few years ago), replaced instead with the rather long Engineering Systems Design pre-fix. Of course, ‘Systems’ is a heavily overloaded term in IBM, hence the Engineering bit on the front. This is all aligned with the Jazz platform renaming in 7.0 (Engineering Requirements is now the pre-fix for DOORS® Next). At the very least this will help with educating people in IBM which - to be fair - has it's own heritage to deal with.

The name changes permeate through to the install, of course. 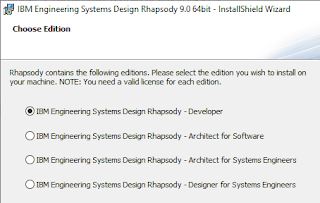 Under the hood the development team have also upgraded their own dev development environment, so you’ll notice that the Microsoft Visual C++ 2017 re-distributables are installed as a pre-requisite.

Install defaults to all users

The install is actually very different. The install now defaults to the All Users option which it most most IT departments want anyway (previously, it defaulted to install for single user with the Share folder going under C:/Users/ 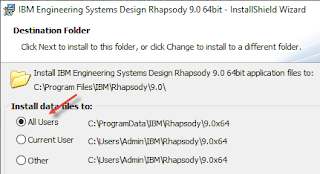 This means that a proportion of the install will still go into the C:\ProgramData\IBM\... folder but the executable components will go into C:\Program Files\IBM\... (for 64 bit).

Don’t forgot that ProgramData folder is hidden by default and hence on new machines you may need to show hidden folders to find it).

When you install as well as noticing that the Wizard is a bit different, Rhapsody 9.0 has a new MinGW adaptor (for both 32 and 64 bit applications). 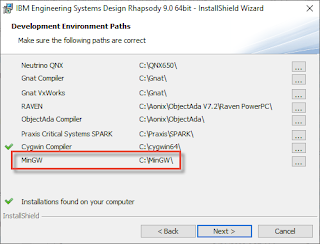 ‘Min’ in MinGW stands for minimal and hence is considered a lighter weight alternative to the use of Cygwin (which can be difficult to pick the right bits from). Mingw-w64 is a port of the GNU Compiler Collection (GCC) compiler chain for windows. I've not tried it yet but will probably give feedback once I have.

MinGW-w64 v.6.3 and 8.1.0 are the supported versions, I believe. MinGW is supported with Eclipse Integrations. For Simulink Integration, IBM is suggested to use the MinGW version supported by the installed MATLAB version.

To align with some IT department requirements, the Rhapsody deployment (install) structure has undergone significant re-alignment in v9.0.

AppLocker is a Microsoft administration component that restricts programs users can execute based on the program's path. For example, with default rules users are not allowed to execute anything outside of program files folders, which Rhapsody previously allowed because the Share folder contained framework libraries and profiles/plugins and was not under the Program Files.

Significantly, the Share folder is no longer in ProgramData. There is instead a UserShare folder the location of which can be changed in the install wizard, but which would default to C:\ProgramData\IBM\Rhapsody\9.0x64\UserShare\ for an All User install:

With an all user install the rhapsody.ini file is still in this C:\ProgramData\IBM\... area of the install, which the user needs to make sure is given read/write permissions (as Rhapsody will read/write to this file and store settings in). 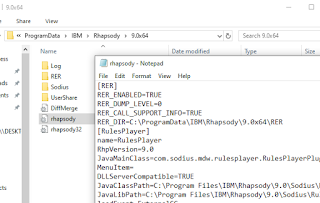 The UserShare folder does not contain the shipped Profiles, however, nor does it contain the pre-compiled framework libraries (more about this coming up).

The framework libraries (e.g. for the Object eXecution Framework or OxF) are a set of libraries that provide common capabilities used when you build state-machines, animate models, and make use of event-queues and the like. Previously, for some of the adaptors, a compiled version of the libraries was shipped. This is no longer the case.

As such, first time you build something with v9.0 then it will try to compile the framework library (i.e. automatically execute the Code > Build Framework operation).

This can take a while, and is initiated by default, and hence might confuse some users as to why there model is taking a long time to build. It does mean that the library you're linking with will be built with the same compiler version and settings are your application though (which at least gets rid of the annoying linker errors you may have seen with animation libraries and Cygwin).

Note the location of the framework libraries built on demand is, by default: C:/ProgramData/IBM/Rhapsody/9.0x86/UserShare.

Share folder (and Profiles) are now under C:\Program Files\IBM\...

Assuming a 64 bit install the previous Share folder (at least most of it) is now moved under C:\Program Files\IBM\.... 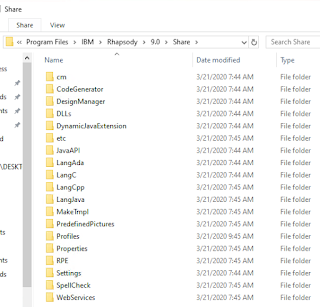 Profiles do contain executable libraries and plugins and Windows wants these to be protected and not in a read-write section.

I was re-assured by the fact that the profiles and plugins that I have written did seem work if I put them in the Profiles folder, but it does mean that you will need admin rights to do this:

Finally, you may notice that the shortcuts have full-names now.  Gone are the Folders in the start menu (which worked really badly with Windows 10 and caused a bit of confusion if you want to give users the choice of Developer or Architect for Systems with a single install).

More to come, but I thought I'd post these initial comments.
Posted by MrC at 20:00