MBSE Awareness training - Star Wars is not a thing, apparently?

Last week I did some (free) MBSE awareness training with some engineering apprentices. I learnt that "star wars" is not a thing. Apparently, there is a film called "ironman" that I should've watched and that ironman is not ironman until he puts on some "special" suit, and that the suit actually can make it's own decisions (which is important to know upfront but sounds a bit dangerous to me ;-) 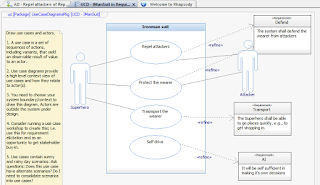 Subsequently, I did find out from Barclay Brown that Jarvis (actually an acronym) is the AI that Tony uses, and is distributed with parts of it executing in the suit and parts executing on servers in Tony's Malibu basement or elsewhere in the cloud we hope, at least when the Malibu house is destroyed. In any case, Jarvis should be an actor. Also, the suit is able to communicate with and control other suits (depending on which movie you are referencing). The suit may also communicate with some kind of enclosure, like the briefcase in Ironman 3 (?), though the briefcase could perhaps be considered part of the suit, especially if it goes WITH the suit after suit deployment. For yet more subtlety, it seems that the suit can have a 'guest' wearer, who is more like a passenger, with the suit being controlled externally, such as when Tony puts the suit on Pepper to protect her from the attack on the house, so perhaps guest/passenger should be an actor!